Posted on October 1, 2014 by audreymedina 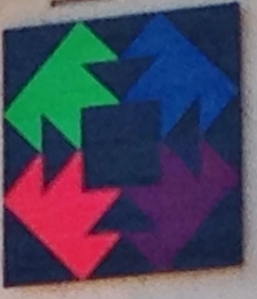 Inspired by quilt blocks along the Lake County Quilt Trail, Ken Tomlison went a step further with a 70s’ style blacklight poster, complete with fluorescent neon paint. Anna Marie and Ken chose Captital T to represent the four Tomlinsons, each in their own favorite color.

The family wanted more space and a few acres when they moved from the caretaker’s house at the Sterling Caviar fish farm in 1997. “We found a piece of paradise on Eden Lane,” says Anna Marie.  Her cobalt blue T matches the trim on her house as well as her collection of cobalt blue glass in her kitchen.

The best view is from 2nd Street, just south of Eden Lane. Drive by after dark to see the blacklight effect.

Posted on September 17, 2014 by audreymedina 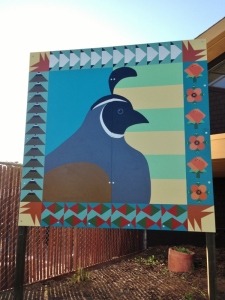 Posted on September 17, 2014 by audreymedina 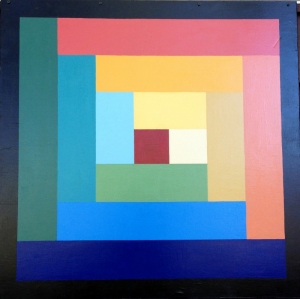 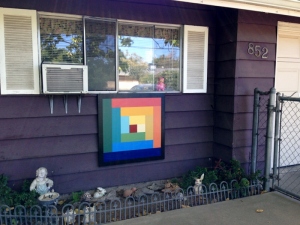 Pat and Hank Day’s  house makes a fine addition to the Quilt Trail at 852 Q Street in Rio Linda. Pat, a long time quilter and leader of the Rio Linda Elverta Elder Craftsmen, chose the traditional Log Cabin design because it represents the warmth of home. Pat and Hank picked their house many years ago to be near Rio Linda’s schools.  There is a wide parking spot across the street if you want a look at the Day’s quilt block.

Posted on September 3, 2014 by audreymedina

Prior to the Civil War, quilts played an important part in the Underground Railroad movement. African-Americans followed secret routes and safe houses from southern slave states north to free states and Canada. Travelers and plantation visitors passed information to slaves about the routes, and helped them prepare for their journeys. Quilts were hung on clotheslines and fences as messages to escaping slaves about food, shelter, and directions along the way. Many routes were followed north, and all routes are known collectively as the Underground Railroad.

Railroad─Our first block represents the Underground Railroad movement, as well as the trip from Sacramento to Rio Linda on the train. Passengers enjoyed viewing fields of wild poppies along the way.

Monkey Wrench─Symbolizes the blacksmiths, who visited farms and knew the lay of the land.  Some could communicate with slaves through the rhythmic beating of a hammer on an anvil. The Monkey Wrench quilt was the first signal to slaves, and meant that it was time to collect tools and knowledge for the  journey north.

Wagon Wheel─Wagon Wheel quilts were displayed as signals to pack essential items. Wagons with hidden compartments were one of the primary ways to transport escaping slaves and carry them to freedom.

Carpenter’s Wheel─Future run-away slaves planned their escapes when they saw the Carpenter’s Wheel displayed. Following the Wheel to the west-northwest, they made their way to Ohio and freedom.

Bears Paw─This design advised escapees to follow animal trails through the mountains, and lead them to food and water.

Crossroads─ Once through the mountains, slaves were to travel to the crossroads. The main crossroads was Cleveland, Ohio. Any quilt hung before this one would have given directions to Ohio.

Basket─The Basket symbolizes the provisions needed for the long journey North. Because they couldn’t buy food or tools along the way, slaves carried baskets with them. Women commonly carried laundry baskets full of provisions to safe houses.

Log Cabin­─The center block in this pattern often represented the hearth or fire of a cabin. A yellow center could mean a light or beacon, and a black center indicated a “safe” house.

Birds in the Air─This design was created by a Quaker woman, using quilted “birds” to create arrows that pointed toward a safe house in Lancaster County, Pennsylvania.

Drunkard’s Path─Advises slaves to use a crooked, or staggering path, on their flight to freedom to avoid detection by slave hunters.

Shoofly─Identifies a friendly guide who is nearby and can help.

Bowties─Signaled travelers to dress in disguise, or put on a change of clothes.

Flying Geese─The points were meant to follow that direction, such as where geese would fly during spring migration.

Posted on September 3, 2014 by audreymedina

Like many new Rio Linda residents, Susan and Paul Hanks found a great spot to locate their modern homesteading operation in 2011. The hard-working Hanks produce high-quality, naturally grown, herbs, vegetables, lamb, eggs, and flowers for local restaurants, caterers, and CSA boxes. Married in 2010, the Hanks chose Sunflowers for their wedding theme, and the Sunflower quilt block that now hangs on their barn.

Swing by their place during Spring and Summer for some great produce, and get a good view of the Sunflower block from the road at 340 W. U Street. 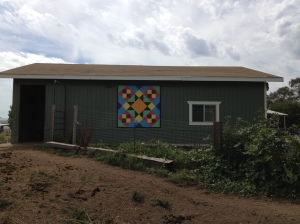 When Debra and Martin Gonzales decided to decorate Rock’n G Ranch, Debra knew exactly what to do. As a member of the Rio Linda Elder Craftsmen Quilters, Debra spends a lot of time designing and creating quilts to benefit the community. Her choice for the barn: Joseph’s Coat, a traditional pattern from her favorite Bible story. With help from the design team, Debra chose colors that blended with her barn, her roses, and her love for the traditional pattern. “It represents strength and perseverance,” said Debra, who worked with the team to create the block. A final touch of purple added four yellow and purple butterflies to this very colorful barn quilt. Joseph’s Coat and the Rock’n G Ranch are located at 6240 W. 6th Street, in Rio Linda. Get a great view of Joseph’s Coat from the roadside just north of the ranch. 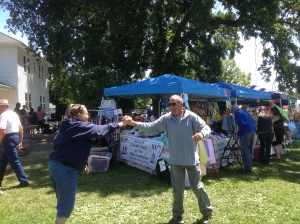 We all had a great time

Deb and Rick ready to represent at our first official event

Mike the Chicken helped us out

As you can see, this website is brand new, and still under construction.